It’s that time of year again. Making plans, setting goals, deciding who and how we’re going to be for the year ahead.

You see if 2017 has taught me anything it’s that a year is a long and very unpredictable time and even the best laid plans can go awry in a moment you didn’t see coming. And so I begin 2018 in quite a different frame of mind than where I was twelve months ago. Yes there are still plans, hopes and dreams, but they are being held lightly and with more than a touch of trepidation. Trying to make year-long resolutions right now seems beyond me.

So I’m going instead for a week of resolutions, but will structure them in such a way that they can be repeated next week, and the one after. Or perhaps after I’ve forgotten them for a month I’ll do another week at the end of February, and then again in June. There are five of them, one for each week day – because trying to structure stuff in to a weekend just doesn’t work for me. If any of these inspire you, feel free to join in. If I manage any kind of consistency I may share a few of them as they happen on social media, so do play along. 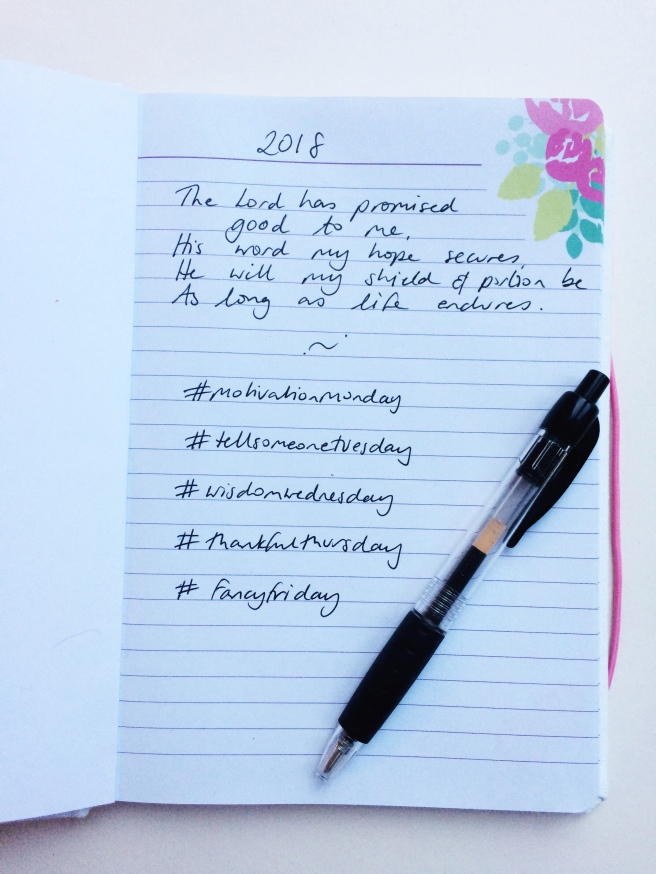 Motivation Monday: I will set one main goal for the week. It might be significant or very mundane, but it will be the singular thing that I want to have achieved by the end of the following seven days.

Tell someone Tuesday: I will tell someone I think they are great. I will speak out encouragement, compliments or gratitude to a specific person.

Wisdom Wednesday: I will take a note of something I have learned this week, a nugget someone shared, something I read which struck a chord. I might even put it in a pretty picture and post it on Instagram.

Thankful Thursday: I will make a list of everything I’m thankful for this day.

Fancy Friday: There are too many things tucked away and saved for best, for occasions that never really come around – and I’m tired of waiting. I’m going to wear those high heels, spray on my best perfume and thank Crunchie it’s Friday! If I’m honest, this is the one I have most chance of continuing and the one I’m hoping others might join me in. So break out the best china, light the pretty candle, pop the champagne, whatever is lurking in a cupboard waiting for its special moment to shine, why not give it a Fancy Friday outing?

So there you have it, my grand plan for this next five days, and perhaps beyond.

And this Motivation Monday, what is my goal? To actually have done each of these five things by the time I get to Friday.

Start small and build from there.

One thought on “My new week resolutions”

When you get stranded overnight in Miami the only respectable thing to do is head to South Beach for dinner. Mexican food to eat and one of their small frozen pina coladas 😊🍹
Sundown at the Westender 🥰
And relax! Enjoying the complimentary drink on arrival at our favourite spot on the island. #pinacolada #redstripe #negril
Harbour wanderings.
Lovely to be in Jamaica again to see George and Crystal get married ❤️
A birthday visit to The Kelpies for Adrian 😊
Loading Comments...
%d bloggers like this: